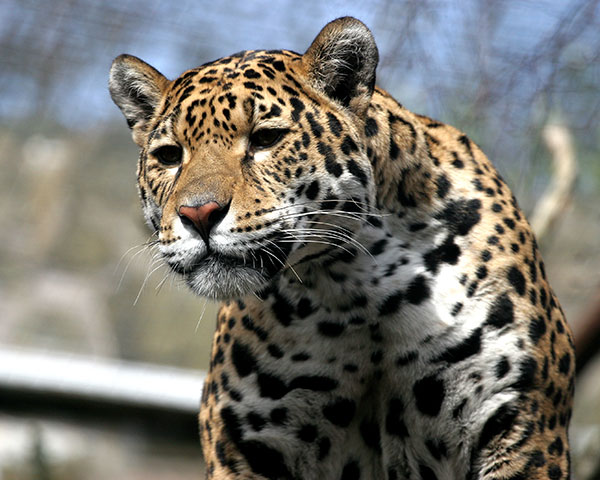 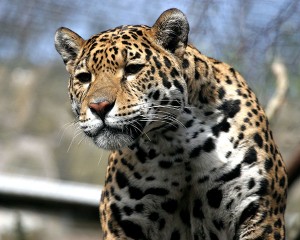 According to the National Academy of Sciences, a typical four square mile patch of rainforest contains as many as 125 mammal species, 400 species of birds, 100 of reptiles, 60 of amphibians, and 150 different species of butterflies. In one study, one square meter of leaf litter, when analyzed, turned up 50 species of ants alone. Following are some nice examples of the Amazon rainforest fauna :

The biggest feline in the Americas , the Jaguar is a powerful hunter on top of the food chain, known for their camouflage spots and the ability to climb trees. The Jaguar can move extremely quietly in the forest using especially padded paws. These abilities combined with jaws that can penetrate a turtle shell and the preference to hunt at night ( Jaguars have excellent vision), makes the Jaguar a stealthy and mortal predator. The Jaguars length can reach three to six feet and weigh between 80 and 370 pounds. The Jaguars diet is composed of large mammals like tapir , monkeys and deer, although it can eat reptiles if necessary. It’s very difficult to see a Jaguar since they are so well camouflaged. So, you may not see a Jaguar in a trip to the Amazon rainforest, but a Jaguar will probably see you while you are there. Maybe you will hear a Jaguar roar at night, since the roar can spread for hundreds of feet. In many regions the Jaguar is shot on sight because a mix of fear and concern for livestock, making this wonderful animal in danger of extinction too.

The Tapir is the largest herbivore (350-600 pounds) in the Amazon rainforest and it’s a very ancient mammal. The Tapir has a strange look with a “nose” that resembles a small elephant trunk. Because their digestive system is very slow and inefficient, the Tapir eats all day and much of what a tapir eats leaves its body undigested. Because of this the Tapir became a major player in the dissemination of plants in the Amazon rainforest region. They have a great sense of smell and hearing which are used to evade predators. Unfortunately because of its size the Tapir is hunted as a source of food and that combined with their low rate of reproduction puts them at a high extinction risk.

There are almost a thousand species of bats in the Amazon rainforest. One of them is the Vampire Bat, which is actually the only true vampire bat in the whole world, the only one that feed on blood. They are very silent, as they need to feed on different kinds of mammals. When they find prey they cut a small part of the prey’s skin and lick the blood that came from the small wound. The blood does not clot because the vampire bat’s saliva has an anticoagulant substance.

One of the longer snakes in the world, and the heaviest, often weighing more than a horse. The anaconda is not poisonous. The snake hunts by ambushing the victim and coiling itself around it, crushing it. The anaconda can swallow, slowly, an entire cow. Anacondas’ are not easily seen (as any snake) but they can be seen when they are eating a big prey since it can take days to digest and they are pretty much immovable in the process. The anaconda is one of the highlights of the Amazon rainforest fauna .

Leafcutter ants perfectly evolved to address every small need for their survival in the last 50 million years. Leafcutter ants have a very specialized social system where every ant has a job, like colony defender , young ants caretaker, leafcutters, gardeners and foragers. The leafcutter ants even use a sustainable agriculture system, gathering fragments from different species of plants and trees, not overusing just a single species, to use in their fungus gardens that will actually provide their food source. The leafcutter ants live in the forest floor and usually build an underground tunnel and chamber complex where they cultivate and harvest their fungus gardens and get protection from the outside threats. These complexes also help the entire Amazon rainforest ecosystem, improving the nutrient cycle in the floor of the forest. The only natural predators of the leafcutter ants are the Nine-Banded Armadillo, the Giant Anteater and some carnivorous flies. Differently than many other species, the leafcutter ants are not endangered, but if the Amazon rainforest disappears, they will definitely disappear too.

These are dangerous creatures that are found in the river.  They are circular creatures that measure anywhere from ten inches to five feet in size.  They are feared because they have a venomous caudal sting.  Generally they will not randomly attack people, but since they are bottom dwellers they may be stepped on by mistake and will then attack.